Hello, as some of you may already know I started University 4 weeks ago. I’ve been meaning to finish this post since my first week here, but something kept stopping me but I am determined to finish it and finally be able to post it- so here it is. This post is written in reflection of my time so far and in particular my first week. It is primarily for those that have already started Uni or are starting in the near future. However there is still something to gain for those that may or may not be in education.

Firstly, let me give you the background story to the title of this post. So for freshers week( introductory week for the first years at the start of Uni), we were told to buy £25 wristbands so that we had access to all the events that were being thrown. At my Uni (University of East Anglia) these events included; going to clubs, fancy dress events, ABC (Anything But Clothes) event, being paired up with older years for family night, tours, sports night, film & pizza night and finally concluding with a Freshers Ball. I left early from the first event which consisted of going to 3 bars/ clubs – I have now become acquainted with the term bar crawling to describe that event. (Bar Crawl-When individuals go from bar to bar in a small vicinity. Usually they drink so much at the first few bars that by the time they get to the last one they’re crawling from drunkenness.) 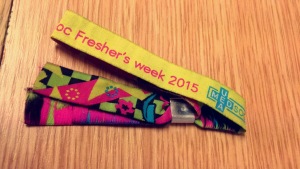 To cut the long story short, I missed 5 of the events. At first I would have liked the idea of going to the freshers ball seeing as most of the other Medical students were thinking that I was an antisocial human being; but I eventually decided against it as it was on a Friday night and I would be breaking the Sabbath. Seeing as I didn’t go to majority of the events, I am annoyed because I did lose that £25. However I am glad because I didn’t lose myself in the sense of compromising my principles just because I felt like I would be losing money or being given negative labels.

Now one important thing to know before reading any further is that I don’t intend to criticize those who enjoy clubbing or drinking alcohol but I do want to stress the importance of not conforming and compromising previous principles and standards. Yes, finally one is at Uni and we are suddenly thrown into a world of freedom; no more having to check in and out with parents. Starting at a new place can lead people down different paths, some that were or were not intended. We meet new people that have different upbringings, lifestyles and interests to what we have. It can be very easy for a person to get lost amongst it all and  begin to compromise previous convictions & principles in order to have pleasure, power or popularity.

Let us look at the story of Joseph. Joseph was tempted by Potiphar’s wife “day after day” but “refused to go to bed with her or even be with her” (Genesis 39:10). Doug Bachelor once said : When you are being tempted by someone or something to compromise your convictions, steer as far away as you can from the edge of the evil.  In order for a person to abide by their principles it is important to stay away from temptation. Earlier on in Genesis, you can tell that Eve wandered too close to the forbidden tree then waited to hear Satan’s rationalizations. Immediately when she saw the tree and heard the serpent question God’s truth, she should have ran for cover. In 1st Timothy 6:11, we are warned to “flee from temptation and pursue righteousness, godliness, faith, love, endurance and gentleness.” Sometimes we may be told by those close to us to strike a “balance”. However often times the balance causes us to conform our christian standards to worldly values.  You can’t balance holiness with a little sin. Being Christ-like is not out of balance.

The Cache River has a total length of 180 miles. However it only covers a distance of 35 miles, it wastes 140 miles to bends and turns. Now the reason a river becomes crooked is because it follows the path were there is least resistance, this can be likened to the reason why a Christian becomes crooked. The path of a Christian should be more like a tight rope than a meandering trail. What Moses told the children of Israel before he died can still be applied to us all today; “Therefore you shall be careful to do as the LORD your God has commanded you; you shall not turn aside to the right hand or to the left. You shall walk in all the ways which the LORD your God has commanded you, that you may live and that it may be well with you” (Deuteronomy 5:32-33)

Now we may be naive and think that it’s only outsiders that cause us to compromise Christian principles and convictions, however the devil mainly works through those closest to us.  Therefore we should all learn to say “Get thee behind me, Satan. I ain’t gonna do it”.

When you study the events surrounding the trial of Jesus Christ, we can see that compromise ultimately crucified Him. Pontius Pilate admitted that Jesus was an innocent man, however he didn’t make a stand for the truth because he wanted to win approval from the crowd. Are you compromising your convictions to win approval from the crowd? Pilate went as far as to give the people a choice to just beat Jesus and then release Him. However, it is important to know that once you embark down the road of compromise no matter where you stop, the devil will pick you up and complete the walk on your behalf. This is because you have signaled your weakness by displaying a willingness to negotiate with wrong. So, once you begin to sacrifice your convictions, it is very easy to slide into ruin.

As a person continues to compromise their conscience becomes numb, until it becomes the fruit of conformity with the world. If we as Christians begin to compromise now in the little things without a death threat, how are we going to cope when we are threatened with imprisonment and death. The bible states numerous of times : STAND! “Do not be afraid. Stand firm and you will see the deliverance the Lord will bring you today”- Exo 14:13. How are we expected to stand in a world that seems to be against our beliefs and convictions, the answer lies in Ephesians 6:11-13.

Please re-read that quote just so that you can grasp its meaning. With God all things are possible!- Yes that includes living life without worldly conformity and compromise. Be determined to stand on the Rock and resist the waves of compromise that are sweeping God’s children from the shores of salvation. Please listen to the song below entitled Stand by Tye Tribett.

Dear Reader, always remember that when you stand for God , you do not stand alone: Jesus stands with you. So whenever you are faced with a decision that is contrary to your convictions, stand for Jesus! You shall be rewarded, maybe not immediately or on earth but surely in the long run.

Bless others with this: